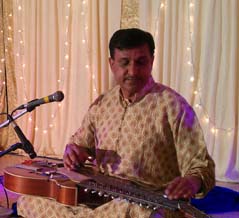 Thakur Chakrapani Singh, an innovative Kachhapi Veena player (Indian Classical Guitarist) with his own style, belongs to the royal family of INDIA.

His childhood had a marvelous blend of Sur and Taal as his family always invited musicians and distinguished artists which gave him chance to listen to vocalists and musicians of all hues.

Initially, he got inspired by his mother and started learning 'Dhrupad' (an ancient music form of India which is also played on VEENA) from Pt. Vidur Mallick at his tender years.

Later he developed his interest towards instrumental music and he choose 'Guitar' as his favorite instrument and learnt from many famous artists like Ustad Maqbool Hussain, Pt. Jyotin Bhattacharya and Smt. Sharn Rani etc.

Chakrapani's unique style of VEENA (Indian Classical Guitar)vadan highlights the strokes of Sarod and the Da,Dir,Dir. He is the only VEENA (Indian Classical Guitar) player to follow this style. Thakur Chakrapani Singh has improved the tonal quality of his instrument by adding 26 more strings in "Tarab" "Chikari" creating a new look in his own modification to cover all the Indian Classical Musical aspect and its range making his vadan more melodious. Being taught by the Sarod and Dhrupad maestros his recitals clearly show his genius of perception into the ethereal mysteries of tonal relationship and nuances in the context of the Raga. 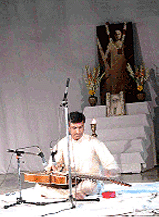 His unique combination of "GAYAKI and TANTRAKARI" style in VEENA (Indian Classical Guitar) and his innovative skills have brought honors to him with the prestigious awards like:

1. "The Legend of Guitar" - The Lifetime Achievement Award for his outstanding contribution in the field of Instrumental Music by "Sangit Sadhna Sansthan", Delhi in 2012.

2. "3rd International Sardar Patel Award 2008" for his lifetime achievement in the field of Arts & Culture.

3. "Baba Allaudin Khan Smriti Samman" for his expertise & contribution in the field of Guitar by The Founder of Maihar Gharana in 2004.

4. "Surmani" for his unprecedented devotion in classical music by Sur-Sringar Academy.

6. Distinct position in the Instrumental Music Event by Chandradhari Museum, Darbhanga in 1981.

He is also a senior graded artist in the A.I.R and T.V. He has widely performed all over INDIA including SANGEET NATAK ACADEMY FESTIVALS and abroad.

Presently he is engaged in his established institution the ''WORLD SCHOOL OF MUSIC'' on the basis of' GURU-SHISYA' Traditional culture. Besides ,he remains busy in his performances and CONCERETS and workshops duly arranged by the different Musical establishment.

Thakur Chakrapani Singh believes that Indian Classical music is an avowed activity(SADHANA) to achieve spirituality. As there are many faith or views for the expansion of Sadhana, so there are different RAGAS for the expansion of Music .The "RAGAS" have deep attachment with the living being, animals and plants too.A musician, in the true sense of the term is a "Sadhak"-who has adopted the process of "SADHANA"-concentration and meditation. Concentration makes a man keen where as meditation or "Dhyan" makes him calm and receptive.

Thakur Chakrapani Singh follows the cult and realized that spiritualism lies there. The devout "Sadhana" of music vocal or instrumental the sound vibration emanating from it has its real effect on the living being, the object of Nature which succumbs to this effect .As a practical researches Shri Singh had applied some of the processes as a devout practioner during his devotional period .By regular musical performances, with particular purpose aimed at an object, brings the desired effect. This he observed on an underdeveloped mango tree- which not only developed in a short time but bore fruits also as a result of the vibrational effect.

Later on he once played Raga "Vrindavani Sarang" on his instrument in the premises where a herd of cows were grazing grass in the compound. After some time, one of the cows from the herd suddenly came nearby amused and enjoyed the melody till he stopped playing. This is but the intuition and the effect of vibration caused by the Raga. Afterwards, in an arranged performance, Shri Singh played “Raga Megh” on his Guitar which enticed the cloud to showering. This clearly depicts the Spiritualism in the "INDIAN CLASSICAL MUSIC".

1. Worked as a Centre Superintendent besides Examiner of degree and Masters level Examinations of Music school and colleges under and the only Music University of Asia Indira Kala Sangeet Vishwavidyalaya, Khairagarh, M.P. INDIA, Along side he worked in the same capacity for the Utkal University Orissa, INDIA.

Few famous institutions utilized the traits of Mr. Singh as Centre Superintendent and Examiner for the Degree and Master’s level examinations-

Worked as Judge for Selection of artists for few famous Departments of Govt. of INDIA such as All India Postal and Telecom Department.

Worked as President for various Cultural organizations such as:-