The Guitar is one of the most dominant instruments in the realm of instrumental music covering tunes of light music, western, Indian or classical music. Its melody and extraordinary range of variations keep the people spell bound the world over. We Indians feel our senses purified and dance mesermerisingly at the tunes of the Guitar. Most of the music exponents attribute Guitar as a western instrument but quite a few know that Guitar was played in the ancient days in India during the Vedic period; the form of music was Samgan. The Kachhapi Veena was used in this period for solo performances and also as an accompanying instrument. This instrument later on is believed to have migrated to different parts of the world and acquired different names while it vanished from India. Kachhapi Veena was one of the famous instruments of that period. The birth of the Guitar can be linked to Kachhapi Veena which was used for Samgan (Geet) thus got its name as Guitar. The mystery of the origin of the Guitar probably is hidden in its name. The western name ‘Guitar’ is derived from the syllogism. If we write Guitar as Geetar, Geet + Tar means an instrument with tar or strings that can be played for any geet or song. The word ‘Geet’ is an Indian name for song in Sanskrit. 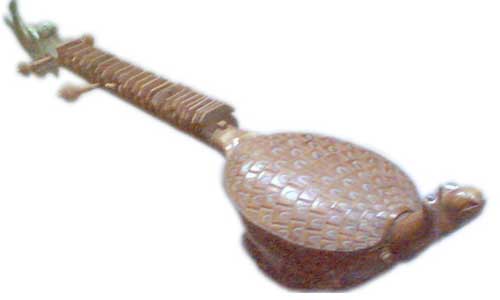 The classical music is being played on Guitar from a very long time. It is probably known to very few people that Late Shri Gopal Singh son of Late Shri Parvat Singh a well known family in music, used to perform in All India Radio (A.I.R.) in 1950s, was taught Guitar from Ustad Haafiz Ali Khan Sahib and there was Chikari and Tarab usage in his playing. But nobody proclaimed the Guitar being any type or model of Veena rather it was adapted as Indian classical Guitar for further modifications to take this instrument to its highest peak.

The instrument eventually became popular as the performers experimented with the Guitar by adding 19, 22, 25 extra strings to it and gave it a personalized name, which is quite ridiculous. The Hawaiian slide Guitar in India as an instrument was used for playing Indian light popular songs. But the performing artists who were desirous to play Indian Classical Ragas on Guitar started making certain improvisations as per their own fascinations to classicize the instrument. At first each of the artist playing Guitar started making alterations, as per his own mode or style as were done with Sitar, Sarod, Sarangi, Esraj, Veena etc., the Indian Classical instruments in vogue.

The alteration in Hawaiian guitar was done with the 6th number string and it was replaced with 0 or 00 number string or by replacing Guitar’s 1st number string and was used for producing Chikari sound. Again by fixing an extra small wooden piece with 2-4 keys on the left side of the Guitar fret board, the Chikari was shifted and the instrument was being played on. Then again seven strings as Tarab were put under the Guitar’s main strings which had promising effect and thus the number of strings rose to 12 for Tarab for the beautiful tone of the instrument. The fret board of Guitar was broadened too like Veena and keeping it hollow, the artists played on it. The artists began playing on this modified Guitar by placing Tarab under main strings, some placed on left and a few on the right of the fret board. Some of them fixed the Tarab and Chikari on the both the sides of Guitar. Because the Indian classical music is being played on this instrument and it was a reproduction of famous Indian classical instrument, the Veena, the most ancient Indian stringed instrument artists named it after Veena of various modes, or gave different names. In this way the artists playing Indian classical Guitars have difference in their instruments from each other.

The Guitar of Thakur Chakrapani Singh which is his own modification is quite distinct and complete one. It has 32 strings besides Chikari and Tarab being used on both the sides in its whole, as if the tune or the melody of Veena, Sarod, Sitar, Sarangi, Violin and Flute is entwined or incorporated in it. It is in its full form and quite different instrument from any of the Indian Guitar player’s instrument or so called Guitar modified versions (Veena). The instrument accommodates tuning arrangements of the Indian classical Guitar in expressing the nuances of classical ragas. The entire techniques of vocal and instrumental classical music have been adopted in this modification of the Guitar. As the modifications are being carried and personalized names are being announced, Shri Singh after an extensive research on series of ancient and modern Indian stringed instruments has named it KACHHAPI VEENA. The Kachhapi veena was an ancient Indian classical Instrument as explorations reveal.